If you aren't yet familiar with our new Vendors Directory, which allows you to store contact information for outside contractors and vendors, assign them maintenance requests, and even directly email them their maintenance requests. Check out our video below - we'll explain how it all works, and give you an idea of how to get started. Be sure to contact us with additional questions and let us know what you think!


Vendor/Contractor Directory - Intro to New Module from Jerry @ BuildingLink on Vimeo.
No comments:


Austin is known for its music scene, universities, and “techie” folk, but did you know it’s also home to quite a number of BuildingLink buildings? Yes, we are in Austin! And we love it! Here are just a few reasons why:

The Technical Companies
A directory of "Silicon Hills" (Austin's own "Silicon Valley") lists over 100 technical companies in the Austin area. This makes Austin a fairly tech-savvy town. In fact, many Austin organizations and businesses were some of the first to be noticed on the Internet because of the large number of "techie" folks in Austin. So yeah…we fit right in.

The Music Scene
Austin is a music industry mecca. Home to South by Southwest (abbreviated SXSW), a large music and film festival that has put Austin on the entertainment map, Austin has a large and varied selection of artists performing all over town. If you don’t know so already, most of us at BuildingLink are also musicians…and all of us have a creative side! So whenever we’re in Austin, you can bet we’ll catch a show or two.

The Capitol
Austin houses the Texas Capitol, and is home to many leaders (like Congress members and the governor). Who doesn’t love those big, grand government buildings?

The Love
Turns out not only do we love Austin, but Austin loves us! A manager at one of our properties had this to say about BuildingLink:

The staff and more importantly our residents have taken to it like a fish to water. As you know, previously we did not accept possession resident unit keys for purposes of distribution to vendors, guests and service providers etc. due to liability concerns and no true accountable form of a chain of custody for the keys. KeyLink has instantly changed all that, our residents love it – the ease of use, the email notifications and detailed reporting are great. Thank you and all at BuildingLink for all that you do, for being so proactive in constantly adding new products and services that make our day to day operations so much more efficient."

We anticipate continuing our great relationships in Austin and developing many new ones in the coming year! Just for fun, we’ll leave you with some Austin celebrities.

Note: We do ask that if you decide to relocate to Austin in the hopes of meeting anyone on the celebrity list, you choose a BuildingLink building for your new home :p
No comments:

Our buildings find the "Instructions" module in BuildingLink--a place where they can track permissions-to-enter, do-not-allows, housekeeper visits, and other resident instructions--to be one of the most valuable tools for front desk staff in BuildingLink's arsenal. As you probably already noticed, we’ve recently made that tool even more powerful by adding a “start date” function. Now, you can enter the text of your instruction, pick the date when it should take effect, and pick the date when it should expire—all upon your initial entry. 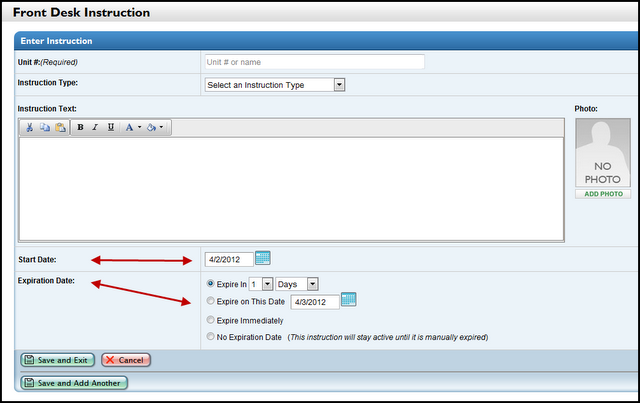 Instructions that have a “future” start date will show up on the main Current Instructions grid when that date is reached. But you can still see your Future Instructions by clicking on the Instructions “Settings” bar, where you’ll also be able to see “Newly Added” instructions (all instructions added in the last 24 hours). 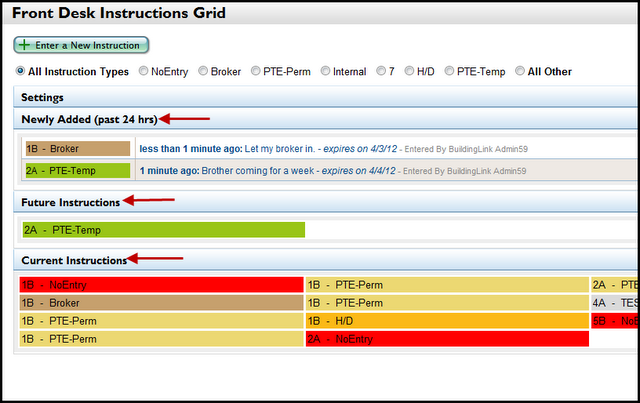