For those of you who aren't familiar with the Shift Log, it's a trendy little clipboard that sits on the BuildingLink home page and acts as an electronic log book. Staff and management can communicate internally, organize notes by specific apartment/unit number, mark high and low priority notes, keep track of each shift, and search notes by priority level, unit number, keyword, who entered the note, etc. Basically, we think it's already pretty darn awesome!

But we just made it even more awesome. Why? Because we know that many properties have multiple buildings or more than one front desk location. And we wanted these buildings to have a way to keep separate notes for each of these locations. So we added a location option that allows you to select (via a drop-down menu on the clipboard) the location you need, and enter or view the appropriate information. Now, notes from different locations will not be mixed together, thereby making it even easier to search! 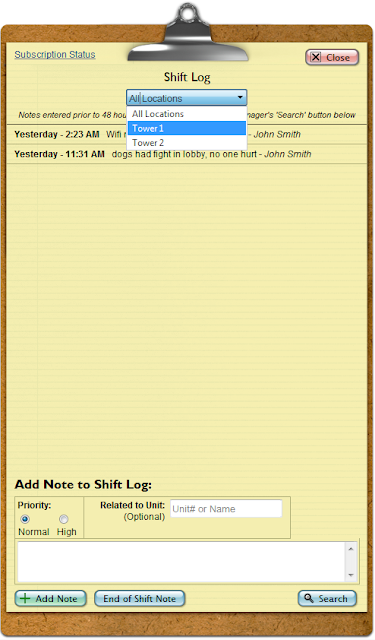 BuildingLink has a place where you can keep track of renovations and other construction projects happening in the building. It’s called “Alterations,” and you can find it in the “Other” tab. All you have to do is click “Add New Project,” and you’ll be able to fill in all the necessary information, so that it’s nicely organized in one place, and searchable later on! You’ll be able to see and adjust details like the length of project, expiration of insurance, momentum of project, date completed, etc. You can assign projects to specific units, and keep track of important contact information related to the owner, contractor, architect, etc. It’s also completely internal—and will never be seen by your residents. 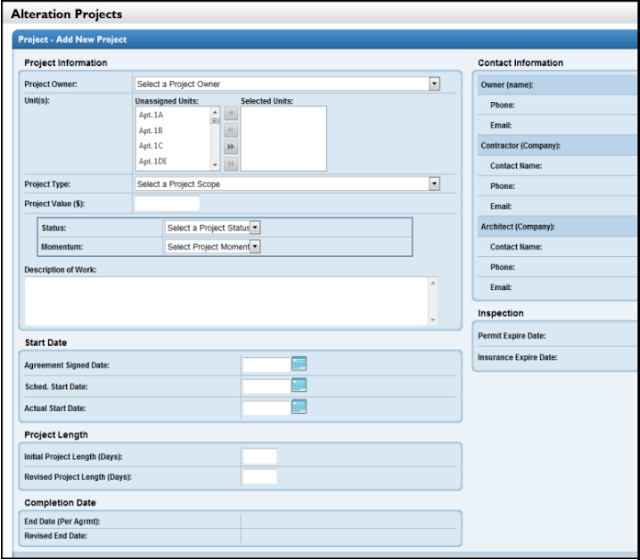 If you need help getting started, feel free to contact our support team and we’ll help you set it up!
No comments:

Fran is the Senior Vice President of BuildingLink, and a fixture in the Sales Department. She is the “go-to” person for most projects or questions, and can be counted on to always know what’s going on. Q: How long have you been at BuildingLink? A: I’ve been here since BuildingLink was an idea in Jerry ‘s [the president of the company’s] head. Q: Wow. What was it like being there for the beginning—seeing it evolve? A: Seeing it evolve? We made it evolve! We even went to a tradeshow with no software, just to market the idea. The very first sales call I made was to a gentleman who was the manager of a premier management company in NY. And he picked up his phone! I said, “Would you like to learn about managing buildings online?” And he said, “Yes, I would.” So we set up an appointment, and I thought that was how it was going to be. Of course for the next year, nobody picked up their phone. But those first few who were open-minded at the beginning--we call them FOB, “Friends of BuildingLink,”--are still our clients and good friends; they have entrusted us with their entire portfolios of buildings and we are forever grateful for their good advice and feedback. Q: I like that. So are you still dealing with people who won’t pick up their phones? A: Well, now that people know about us—now that we’ve developed a reputation for finding solutions to problems that buildings have, making them more efficient and accountable, streamlining operations (all that good stuff), I’m more involved in incoming calls than outgoing. We do have a fantastic sales team who spread the word to those who haven’t come by it on their own--to other cities, and to other countries. In fact, we are currently designing the ability to use our software in multiple languages--so World, here we come. Q: Can you explain what you mean when you say you are now dealing more with “incoming calls than outgoing?” A: Well, now people are calling me! They’ve heard about BuildingLink and they want it. Or they use it in one way and want to explore what else they can do. Today, I spoke to a gentleman who is in the temporary housing business. He uses BuildingLink for the apartments he manages in a variety of rental buildings. He wants to explore using our software to communicate with his temporary residents. We will create a “virtual building” for him to help him achieve that goal. The more users we have, the more new ideas they generate about how to use BuildingLink in less traditional ways. Q: Gotcha. In what other ways has your role in the company changed as BuildingLink has grown? A: I’ve kind of done everything from Day 1—we now have a programming team, a support team, a sales team, etc., but from Day 1 it was Jerry [the president of the company], me, and Yvonne (who kept us afloat while we ran around town). I trained buildings, Jerry trained buildings. And we wanted to do this, so that we could see firsthand what people needed and how to make it better. We listened and developed a reputation for hearing what was needed and making it happen. To this day, our support team (who does most of the training) comes back with great ideas from our users on how to improve the software/what to develop next. We are still listening and developing. No one here rests on their laurels. Q: On a more personal note, what do you do when you are not at BuildingLink? Do you have any hobbies? I’m a gym rat, reader, movie-goer…I love the theater. I just saw Book of Mormon, and the next play for me is Death of a Salesman. Q: What did you think of Book of Mormon? Irreverent but very funny. Loved it. Speaking of irreverent, I’ve also become a religious John Stewart watcher. Q: Nice. Let’s end with a little bit about your background—what did you do before BuildingLink? I was a commodities trader, I taught emotionally disturbed juvenile delinquents, and I was a stay-at-home mom for a few years. When we started this company, I knew zero about computers and minus zero about real estate. That’s actually part of the reason I was involved in BL from the start—I wanted to learn a lot of new things, and I did!
No comments:

Maybe you already know the Asset Manager well and your building uses it extensively. More likely, you've never heard of it. But if you have rental/loaner items or storage/bike spaces, you might want to know that it's there for you!

In fact, the Asset Manager was born when we realized that properties needed to keep track of both short-term assignments (like parking or borrowed items) and long-term assignments (like appliances and storage units). We wanted to create an organizational system where properties could track all of their items in one location, and be able to "assign," "unassign," or change the assigned unit without any hassle.

And, like virtually everything else in BuildingLink, it’s customizable! We’ve provided you with asset categories that we think will be most useful to you (items that, from our experience, buildings like to track) but you can always “rename” any of the categories to keep track of whatever you’d like. You also get to decide what type of information you need to store in each category—again, we’ve given you suggested fields, but you can “rename” any of them.

P.S. If you choose to display it, all of the information you store in the Asset manager database will also be viewable on the Resident Lookup screen! 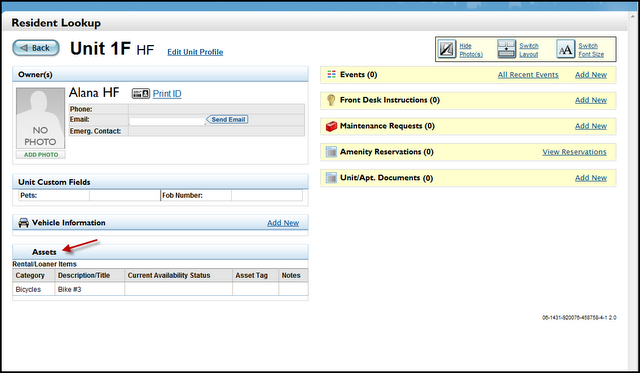